I’ve said before that I’m one of those strange people who really LIKES doing laundry. I actually find it rather therapeutic and I love the challenge of making really dirty clothes, clean again! BUT, one thing I do NOT like to deal with in the laundry is the duvet covers on our beds.  Actually it’s not the washing of them per se….but the fact that AFTER I wash them I have to PUT THEM BACK ON! I honestly couldn't remember the last time I'd cleaned mine, and that's rarely a good sign! END_OF_DOCUMENT_TOKEN_TO_BE_REPLACED

Over the years I have come up with my own way to sort of smashing and smooshing the duvet back into the duvet cover, but have never been really satisfied with this method. I figured there had to be a better way…and wouldn’t you know it….there was!!  Actually SEVERAL better ways than mine! Go figure.

Instead of trying to re-create all of them for you…I am going to share from some other reliable online sources.

Let’s start with the “hand puppet” method as shown by The Fine Bedding Company. After a lot of research, this seems to be by far the most popular method, but after watching all the videos, I’m not convinced! You be the judge!

Looks very smart! But my questions is….how does one person do this with a KING size duvet cover? hmmmmm.

Next, for your consideration is the “10-second duvet trick” from WomansDay.com.

Pretty tricky huh?! It appears that this would work with ANY size duvet.

Next up we explore the “duvet burrito” method of putting on a duvet cover from Scott Culley on YouTube.com. 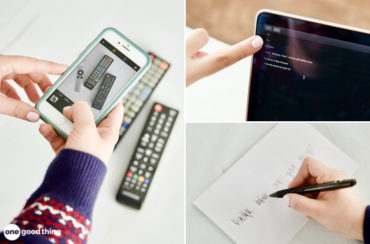 I've got another batch of "cheat codes" for real life, with tips that can help you get your security deposit back, avoid embarrassing email mishaps, and much more! END_OF_DOCUMENT_TOKEN_TO_BE_REPLACED

One major advantage I see to THIS method vs. the hand puppet method is not having to be 10 feet tall to shake the duvet cover all the way down the duvet. Lastly, I present the “binder clip method”. Unfortunately I couldn’t locate a video demonstrating this method, but this is how it was explained on Lifehacker.com

To quickly and painlessly install a duvet cover, put the duvet in the cover one corner at a time, securing each corner with a large binder clip. Spread the combined cover and duvet on the bed. Reach the center underneath and lift; hold it over your head with your hands and let the sides fall around you. Shake the duvet so that the sides fall to the sides of the cover. Spread the duvet on the bed and give the final touches. Remove the binder clips.

And just for fun…I found one more method in the comments section at Lifehacker.com worth mentioning simply for its’ entertainment value! The “birthing whale technique!” “I do what I call the “birthing whale technique” I lay the cover out flat and then I crawl inside the cover with the duvet in hand so I’m like basically completely inside it. I can see what is going on and line up the corners and what not. Then I wiggle out (like a birthed whale) and button it up after a few shakes. Works awesome and the cats enjoy attacking me while I work.”  ~~npage148

Thanks for sharing that npage148! Made my day envisioning this. :-)

Now if I could just figure out how to get the corners of the DUVET to stay in their respective duvet cover corners!! How To Pack The Best Lunch Ever When Sharpies Attack: How To Rescue Anything And Save The Day 7 Things You Do That Are Ruining Your Jewelry 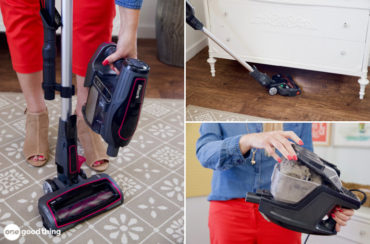 5 Costly Mistakes You Make With Your Vacuum Cleaner The Cheap And Easy Way To Make Any Hanger NonSlip Instant Pot vs. Slow Cooker – What You Need To Know The Pros and Cons of Using Your Smartphone As Your Wallet How To Remove Paint Splatters And Rescue Your Clothes “Why Didn’t I Think Of That?” – Part Sixteen 7 Things You’ll Want To Stock Up On In October I have sewn a shoelace type of material on all four corners and the middle of each section of both the duvet and the duvet cover then I insert one corner at a time and tie the strings together and it doesn’t move around ! and when it comes time to wash just start at the top bull the bottom corners up and and untie super easy and takes little amount of time to do!

I am SO glad someone other than myself finds laundry therapeutic! I love to put some music on and just relax and wash and fold.

Duvets are common in Europe. I just returned from a trip to Germany, Austria and the Czech Republic. All our hotel rooms had double beds consisting of two twin size mattresses placed side by side in a frame. Each side of the bed had a twin size duvet and cover. The two duvets were each folded in thirds crosswise and placed on top the bed like burritos. This made for a very tidy and easy way to make the bed. Because the duvets and covers are never larger than twin size they are easy to manage. A bonus is that… Read more »

Hi Jillee, I haven’t been reading your blog too long, and I was scrolling through some of your past posts when I saw this about duvet covers. When I first looked around for one to cover a down comforter, they were either non-existent in stores near me, or were ridiculously expensive. It was awhile ago, before I used a computer. I’m not sure, thinking back, that we even owned one then, unless my hubby had one for work! So I had to look in store catalogs or go to the different department stores to find anything! Anyway, I looked in… Read more »

I know what I’m about to say has nothing to do with putting the blanket into the duvet cover… but…does anyone know why duvet covers cost more that the bed in a bags? (The whole blanket, sheet, bed skirt, pillow case(s), flat sheet set) I find that its cheaper to buy the whole sets than to buy the duvet covers… Now I have 4 blankets… (that take up a lot of space) and two duvet covers I switch from… When I look at a duvet cover… it looks so simple… two flat sheets can be sewn together… but why does… Read more »

I also sewed binding strips to both. I love the picture of the duvet you have. Where did you buy that? The big striped one. It’s beautiful!