Home · Homekeeping · How To Get Rid of Shower Mold

This post is not a “magic bullet”. It’s main purpose is to save those of you who have this same problem lots of wasted time and effort. I wish somebody had told me this sooner. :-) For months I have been trying every product and method known to man or woman to remove the mold that had somehow taken hold in the two corners where the shower door meets the shower stall.

How To Clean Your Glass Shower Door With A Lemon & Salt

A couple of weeks ago my hubby was complaining about the "scum" on the inside of the glass shower door in our bathroom. Even though we squeegee the ... END_OF_DOCUMENT_TOKEN_TO_BE_REPLACED

I started out with natural cleaners (lemon juice, vinegar, tea tree oil, etc) and eventually was forced to try more caustic measures. My most recent attempt involved spraying straight bleach from a spray bottle, letting soak for several hours and then trying to rub off the black stains with a Magic Eraser. Nothing. 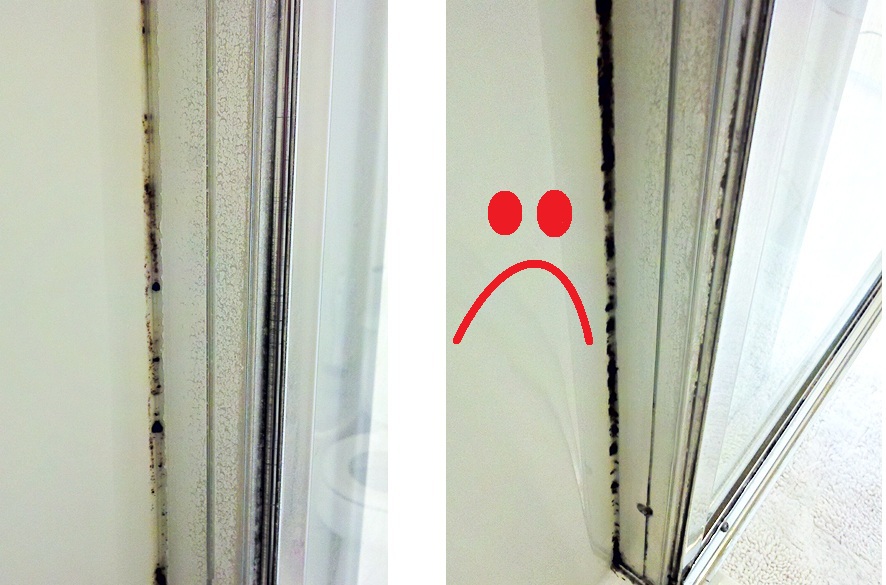 After more research today on the subject, I finally realized that NO CLEANER was going to get rid of this gunk because it was now PART of the silicone caulking. It wasn’t something that could be scrubbed off, because it was IN the caulk. ugh. While that was NOT what I wanted to hear…it made perfect sense and I had reached the point whereI was willing to do WHATEVER it took to get rid of it. 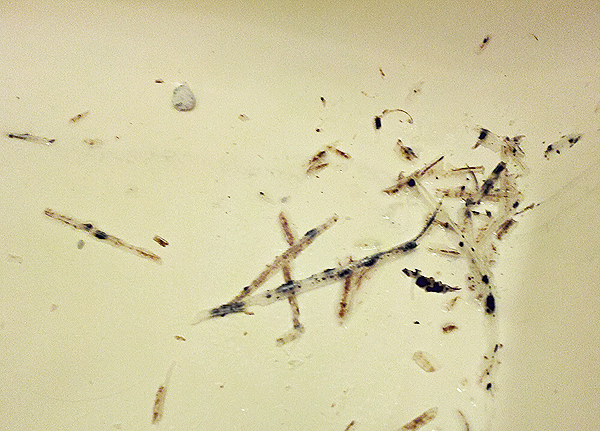 So…with a single-edged razor blade and a pair of tweezers…I proceeded to remove the caulk on the two shower door seams. It was actually a lot easier than I thought it would be. Run the blade underneath the edge of both sides of the caulk line, then I took the tweezers and pulled off sections at a time. Probably took me about 15 or 20 minutes. Tops. 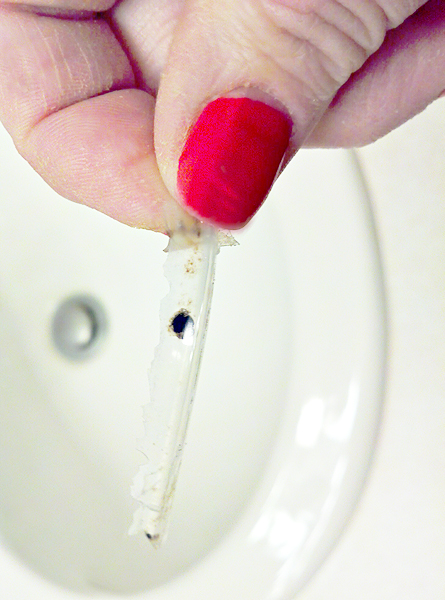 And here is proof positive of what I was talking about.  See that black spot.  That is mildew ENCASED in the silicone. It’s not on the surface of either side of that little clear piece of silicone…it is actually embedded inside of it! No WONDER nothing I tried worked!

After I’d scraped off all the silicone caulk…I gave the areas another good cleaning with some diluted bleach and dried it thoroughly. (It should be noted that now that the caulk has been removed…other less caustic cleaning agents could be used such as Lemon Juice, Vinegar, Hydrogen Peroxide, Tea Tree Oil or Borax). 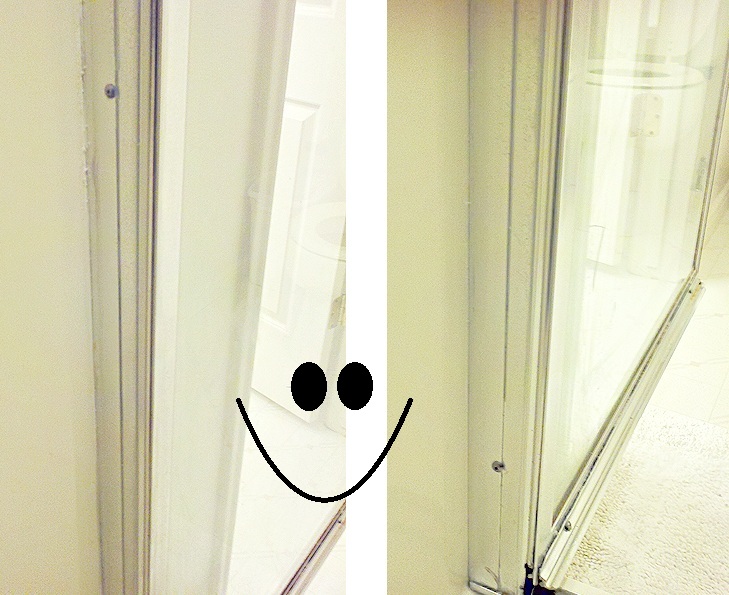 I can’t tell you how thrilled I am to FINALLY have that black stuff gone!

My Best Cleaning & Organizing Tips For Every Room In The House

If you’ve followed my blog for a while, then you already know that we’ve posted a LOT of cleaning tips over the years! If you can clean it, chances ... END_OF_DOCUMENT_TOKEN_TO_BE_REPLACED

Even though it was a very small amount…mold is nothing to mess around with. Shower mold dangers include a number of respiratory disorders, stomach infections and allergies.

Now that the mold is gone…it’s all about prevention.

Ventilation:
Obviously ventilation is important. I plan on replacing our bathroom ceiling fan with a new and improved model. It doesn’t seem to be doing the job lately and has been making a crazy sound.

Keeping the Shower Dry
I’m also going to take the advice of my friend Denise in ARK and keep a “shower drying towel” hanging on a special hook in the bathroom and do a quick wipe down after each shower.

Shedding Some Light On The Subject
And finally, since mold flourishes in the dark and our shower is in a windowless room with the toilet, keeping light on the subject is going to be imperative. Haven’t quite figured out what my plan for that will be yet…but I will. :-)

But for now….I’m off to research how to replace silicone caulking in your shower!

How To Make Fizzy Cleaning Tabs For Hard-To-Clean Bottles

10 Solutions For Your Most Annoying Kitchen Storage Problems

7 Things In Your Kitchen You’re Storing The Wrong Way

The 5 Most Popular Posts Of 2019 (And The Most Controversial!)

The Best Way To Clean All The Blinds In Your House

18 Unexpected Things You Can Clean In Your Washing Machine

This One Amazing Product Will Solve All Your Dishwashing Problems

11 Housekeeping Mistakes We All Seem To Be Making

How to Safely Clean Baseball Hats

13 Brilliant Cleaning Hacks That Will Save You So Much Frustration

Add 4 ounces of tri-sodium phosphate which is commonly known. You will need to mix a cup of it in a gallon of water and then scrub the affected area two or three times until all the traces of mold have been removed.
To do this, use all three of these natural green methods.

wipe new where to buy

We’re a gaggle of volunteers and starting a brand
new scheme in our community. Your site provided
us with useful info to work on. You have performed a formidable job
and our whole neighborhood will probably be thankful to you.

Usually I don’t learn article on blogs, but I would like to say
that this write-up very pressured me to check out and do it!
Your writing style has been amazed me. Thanks, very great post.

This is known as house cooking and not only does it not remove mold, it fosters its growth.
If you want to completely remove black mold from your home and make
it safe for your family, there are some steps that you need to
take. Mold can be cleanup up if done properly,
but if done improperly you can make the damage worse.

You might get straight forward, upfront and detail
scope of function. Also get readings from places where chimneys, porches, garages, and patios attach to the house.

This is a very interesting question that everyone would like to know.

How did you replace the moldy silicone? Mine is awful, and want to do what you did, but then how did you fix the gap that silicone left?

I loved as much as you’ll receive carried out right here.
The sketch is tasteful, your authored material stylish.

nonetheless, you command get got an nervousness over that you wish be delivering
the following. unwell unquestionably come further formerly again since exactly the same nearly very often inside case you shield this increase.

Hi there! This blog post couldn’t be written much better!

Looking at this post reminds me of my previous roommate!
He continually kept preaching about this. I will
send this post to him. Pretty sure he’s going to have a very good
read. Many thanks for sharing!

We are a group of volunteers and starting a new scheme in our community.

Your site offered us with valuable info to work
on. You have done a formidable job and our whole community will be grateful to you.

Thank you for sharing your info. I truly appreciate your efforts and I am
waiting for your next post thank you once again.