I have a secret. I have a somewhat obsessive personality.   (Those who know me best have probably just spit their coffee/diet coke/beverage of choice all over their computer screen!)

One of the things I tend to obsess about is food. Or more specifically…once I find something I LIKE…I tend to eat it….often. :-)

A few years ago I discovered my infatuation with FROZEN fruit. It started with FROZEN grapes…and escalated to FROZEN bananas.  If you haven’t ever tried them that way…I HIGHLY recommend it!

Lately, however, my FROZEN FOOD obsession has degenerated to these frozen concoctions…..Creamies Ice Cream Bars. I’m partial to the chocolate. 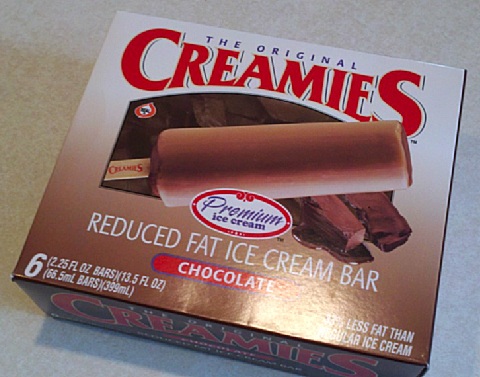 After some very quick and rudimentary calculations on my part:

UPDATE: 11/27/11
For my second batch I decided to try adding some sweetness (these were a little less sweet than my beloved Creamies). I added some powdered sugar. Started with 1/2 cup and I think I ended up putting about a cup in before I thought it was the right sweetness.  Liked this batch much better! :-) I didn’t actually have any small paper/plastic cups handy…so I improvised. I experimented with a few different things I had laying around.

Experiment results:  avoid the glass mason jars and styrofoam cups. The pops “POPPED” right out of the plastic cup and the plastic baby food container.

Here are just a bunch of random pictures of my creamy pudding pop making session: Overall thoughts and observations:  DELICIOUS!  Cold, creamy and inexpensive! Fellow FROZEN FOOD enthusiasts like me should definitely try it! :-) The Best Pumpkin Pancakes Ever 10 Things You Can Make With A Jar Of Pasta Sauce “Stuck Inside During A Snow Storm” Marshmallow Popcorn Thank you so much for this post. I love the Creamy’s. I used to live in Utah and bought them very often. We now live in Mississippi and I can’t get them anymore so I will definitely give this a try. Now if you have a easy substitute for Grandma Sycamore Bread ❤️❤️

You know – I have a similar recipe but it uses two cups of vanilla ice cream instead of cool whip. It’s excellent, and a good quality vanilla ice cream is a great base! Any flavour instant pudding works, and you can use your imagination to add ‘accessories’. I’m still going to try this one, though!

Saved again by the Jillee Blog! I have saved so much with the grate free laundry detergent recipe. I am without cool whip however thanks to your blog I am inspired to improvise and make some of these along with my old school homemade jello and koolaide popsicle recipe. I really think you may need to rename your blog to so many good things by Jillee! THANK YOU! Keep up the amazing work!

Sounds great! But no sugar free, it almost always contains neutasweet which gives me a terrible headache

[…] to sell, right?  Well, I sure miss them, but this recipe comes pretty darn close.  I got it from One Good Thing By Jillie.  I used her recipe, she had several different ones on the […]

Do yourself a favor and don’t try mixing the recipe that includes Cool Wip in your stand mixer. Mine churgged along fine for about 30 seconds and then exploded chocolate mess all over the kitchen. It must have hit a hard chunk of Cool Wip. If you really want to use your stand mixer, use caution and hold a towel over the bowl or maybe break up the chunks of Cool Wip with a fork before you start whisking.

The Kraft website actually has cool whip listed in their version. Whoever put it on pintrest must have forgotten to put it! They also have a couple variations listed.