During the past week or so, we’ve posted a few different ideas for Thanksgiving DIYs to make the holiday special, like custom containers for leftovers and easy centerpieces for your table. And with Thanksgiving being tomorrow, there is only a limited amount of time to add any last-minute special touches to your holiday! 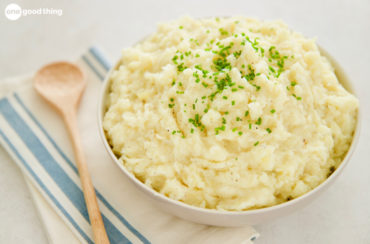 This Is The Mistake Everyone Makes With Their Mashed Potatoes

My only regret is that I didn't learn this life-changing mashed potato tip sooner! END_OF_DOCUMENT_TOKEN_TO_BE_REPLACED

So that’s where today’s post comes in. :-) Today I’m going to share a few cute and easy napkin-folding methods that are sure to add something special to your table, as well as wow your guests! Each napkin only takes a minute or so to put together, so why not gather up the kids and make a fun, pre-dinner activity out of it? I love this one! It’s out of the ordinary as far as napkin folds go, but it’s still refined enough to add to a holiday table. You can have the flap open or closed, but it would be fun to leave it open and have a place card with each person’s name tucked inside!

Start by folding on corner of your napkin over to the opposite corner, so you end up with a triangle, with the long side facing you. Take the left corner of the triangle and fold it in to the middle of the long side. Do the same with the right corner.

Repeat this process again, bringing the fold on the left side in and folding it so that it meets the center line of the original triangle. Repeat on the right side. Take the squared off edge that is facing towards you, and fold it away from you to make the body of the envelope. The remaining flap of napkin on the edge away from you is the flap of your envelope! These napkins will look so impressive standing on your place settings – your guests will love them! 20+ Fun and Festive Ways To Celebrate The Olympic Games

I’m sure you probably already know, but it bears repeating - the Opening Ceremonies of the 2016 Summer Olympic Games are happening TONIGHT! I’m so ... END_OF_DOCUMENT_TOKEN_TO_BE_REPLACED

This one works best if you’re using napkin rings. I think this one is especially fancy-looking, so it’s a winner if you want a formal feel for your table!

Start by folding the napkin in half to create a rectangle, with the folded side facing toward you. Take the corners along the far side and fold them in toward the center to create a triangle.

This fold creates a sort of trivet that you can set your dishes on top of. It adds a nice, decorative touch to your table without taking up any extra space!

Reach under the napkin and grab the flaps created by the second fold. Give them a gentle tug outward to create a perfect “artichoke leaf”! Make Your Table Sparkle With These Easy-To-Make Ice Bowls

The dog days of summer are upon us and it is HOT here in Utah (like upper 90s hot!) and according to the weather forecast it is going to stay that way ... END_OF_DOCUMENT_TOKEN_TO_BE_REPLACED How To DIY Oprah’s Favorite Things This Is The Simplest Way To Totally Transform Your Kitchen This Clever Decor Hack Is Downright Medieval (In The Best Way) 19 Easy Spray Paint Ideas That Will Save You Money 7 Amazing Things You Can Do With Your Old Calendar How To Make Your Own Faux Flower Accessories Creating An Entryway {When You Don’t Have One} I have no creativity. Love your ideas. Thanks for sharing, Jillee!

I am very artistic & creative -inept as well!! I love this site for its amazing ideas!!!

Love these but it would have been better with a little video to go along with the written instructions. It’s hard to see some of them and sometimes the instructions are a little hard to follow (especially the chef’s hat), at least for me.

Love these. We probably won’t use this though. We just don’t get very fancy at our place, plus with 20 people coming it can get crazy.

Wonderful, thanks for these Jillee, I’m going to use this for Christmas dinner, love the artichoke fold.